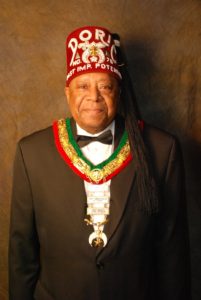 Walter C. Sloan was born in Detroit, MI in 1938 to Walter E. Sloan and Dorothy L. Sloan. Walter matriculated through the Detroit Public School system and attended the Detroit Institute of Technology. He was drafted into the U.S. Army in 1961 and married Cecelia Jackson the same year. After 2 years of service he was honorably discharged and gained employment with The American Tobacco Company. In 1964, Walter and Cecelia had their first child, Kelly, Martin and Erica were later born. In 1968, Walter was promoted and relocated to Houston TX , Erica was born in Houston. In 1972, he was promoted to a national position and traveled from coast to coast for the next 22 years, retiring in 1994.

In 1969, he joined Magnolia Lodge #3, Prince Hall Masons, later joining Douglas Burrell Consistory #56 and Doric Temple #76 Shriners. His wife, Cecelia (dec’d) also became a member of Doric Court #83 in 1993, his son, Martin (dec’d) also became a member of the same Masonic bodies as Walter. In 2012, Walter established the Cecelia J. Sloan Memorial Scholarship Fund. With the death of his son, he will add Martin Sloan to his mother’s Memorial Scholarship Fund. The program works in conjunction with Doric Court #83 to award graduating seniors assistance in furthering their graduation.