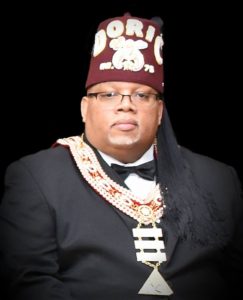 Education: Graduate from Eau Claire H.S. in 1983. Received a Bachelors Degree in Computer Science from, The University of Southern California.

His masonic travels began with The Most Worshipful Prince Hall Grand Lodge, South Carolina Jurisdiction , with Corinthian Lodge #11, where I served as Chaplain. My Masonic memberships, also include , Ethophia Chapter #60, Royal Arch Mason, Joshua Commandery #10, Knights Templar and CC Johnson Consistory #136, 32 degree. After relocating to Texas, he demitted to , The Most Worshipful Prince Hall Grand Lodge of Texas and it’s Jurisdictions. My membership is currently with, True Square #108. I serve as Tyler. I also serve as , High Priest and Prophet to Doric Temple #76 of the AEAONMS .

Employment: After a distinguished 21.5 years career with USMC  and retiring Oscar continued his service with the Federal Government as a civilian employee, with the Department of the Army at Fort Jackson Training Base in Columbia, SC.

Family: Married to Tannie, together they have 5 adult children and 2 grandchildren.