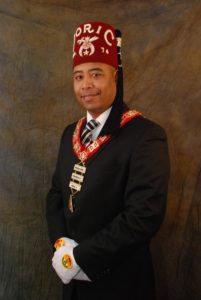 Memberships & Positions held include the following: Member of  Brookhollow Baptist Church where he serves on the Men’s Ministry and as a Decision Time Counselor for new member orientation; Christopher is also a Life Member of Kappa Alpha Psi Fraternity Inc & Southwest Province Life Member and was originally initiated as part of the Zeta Beta chapter. He is currently a member of the Houston Alumni Chapter. His other affiliations include being a Life Member of the Houston Live Stock Show and Rodeo were he works as a part of the Black Heritage committee as a officer as well as the Directory Assistance committee; He is a member of the Texas Prince Hall Masonic family and has served as Special District Deputy Grand Master District 15-A,  Past Master of Bayou City Lodge #228, John Henry Burch #2 Holy Royal Arch Masons (King), Thrice Illustrious Master of Perfection Council #9 Cryptic Masonry, Grand Deputy Web Master Grand Council Royal & Select Masters of Texas, Sanderson Commandery #2 of Order of the Knights Templars, Douglas Burrell Consistory #56 Ancient & Accepted Scottish Rite Masonry (330 degree mason, Southern Jurisdiction) and Doric Temple #76 Prince Hall Shriners (A.E.A.O.N.M.S.). He has been a proud member of the Board of Directors for the Thomas H. Routt Foundation since 2009 & also serves a Trustee Board member for the Prairie View A&M Foundation since 2021.

Employment: Upon graduation Christopher was employed by a major oil & gas company and worked overseas for several years prior to returning to the continental United States where he took up residency in with the Greater Houston, TX area. He has continued to work in the oil & gas industry for over 23+ years and has extensive experience working domestically and internationally within the upstream segment and is currently employed as a Project Manager with a Major Oil & Gas Company in Houston supporting Gulf of Mexico offshore operations.